Before 1947, the focus of the Florida State College for Women (FSCW) was on a liberal arts education for undergraduates. Therefore, the main thrust of the Chemistry Department, at the time, was chemical education.

By 1913, FSCW offered a bachelor’s degree in chemistry. Before that, degrees were offered in the Natural Sciences up to 1894, Physical Science and Biology from 1895 to 1900, and Physical Science from 1901 to 1912. Bertha N. Langley received the first master’s degree in 1914 on the topic, “Chlorine in Surface Waters of West Florida.” 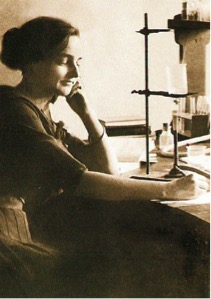 Part of the group of committed faculty of 1947 stayed during the transition to a research university. Others retired or went elsewhere. There were thirteen faculty members at the time of the 1947-49 transition, and they ranged in expertise from analytical chemistry, general chemistry and biochemistry to organic chemistry. Of the group that continued after 1949, Leland Lewis, Katherine Hoffman (later, Dean of Women), Howard Smoyer, Jack Eichinger and Mary Lester were among those who continued to serve the Department effectively until their respective retirements.

Jennie Tilt, Ph.D. was a faculty member who studied nutrition within the Chemistry Department. She served in Nutrition from 1922 to 1933 and in Chemistry from 1933 to 1947. Recently, M. Louise Cason (B.S., Chemistry, 1945, FSCW) endowed a scholarship in Tilt’s name.

With the advent of university status in 1947, the arrival of Karl Dittmer as the Head of Chemistry, and the hiring of research-oriented faculty in 1949, steps were taken to upgrade undergraduate curriculum. American Chemical Society approval was obtained in 1954. The doctoral program, initiated in 1949, awarded its first degree in 1952 to Boris Gutbezahl for Chemistry.

The Department hired a series of highly qualified faculty members over the ensuing 50+ years to lead the freshmen chemistry program. One was James Quagliano, author of a very widely adopted text, Chemistry, with three editions, the first being in 1958, and Coordination Chemistry by J.V. Quagliano and L.M. Vallarino. In addition, Edward Mellon, who was later elected Chair of Chemistry, Jack Eichinger, and Ronald Clark all had led the freshmen chemistry program. Katherine Hoffman authored two books, The Chemistry of Life, offered by the National Science Teachers Association in 1964 and Chemistry for Applied Science (Prentice-Hall, Inc., 1963).
The Department always had, with its emphasis on research, a strong commitment to under-graduate education, including the education of non-science majors. Russell Johnsen was hired in 1951 with a joint appointment in the Program in General Education and Chemistry to head a General Science program integrating chemistry with other sciences. This course was required of all undergraduates.

Beginning in 1958, individual science departments took over the non-science majors programs. Johnsen was put in charge of the non-science majors chemistry program. He and Ernest Grunwald co-authored an innovative textbook, Atoms, Molecules and Chemical Change, in 1960. The textbook went through three English editions and several foreign editions. The book was characterized in Chemical and Engineering News as one of the best sellers of the period in that area. It took an historical approach, which was widely copied before “environmental” and “relevant” chemistry took over the non-majors market in the late 1970s.

In 1966, Earl Frieden wrote a popular introductory biochemistry book with Thomas Peter Bennett called Modern Topics in Biochemistry: Structure and Function of Biological Molecules. This was part of a series of ten monographs on special topics for general chemistry edited by Russell Johnsen.

Gregory Choppin worked with Nobel laureate Glenn T. Seaborg to offer the Chemistry Education Materials (CHEM) course to high school teachers in our area. This was part of the reform in science education, similar to what the Physical Study Science Committee did for teaching physics. Choppin worked with the FSU High School to offer a course to twenty teachers, with a focus on the experimental method and nature of chemistry.

An annual chemical education seminar started in 1969-1970. In 1993-94, the Department named it in honor of Edward Mellon; since then, it has been known as the Edward Mellon Honorary Chemical Education Seminar.

Beginning in 1960, the Department participated in a southeastern regional consortium, supported by the National Science Foundation and headquartered at FSU, called the Center for Research in College instruction in Science and Mathematics (CRICISAM). Russell Johnsen was the Vice Chair of this group.

Penny J. Gilmer has led the Department’s involvement in National Science Foundation-funded grants in science teacher preparation. From 1992 to 1995, she worked with Kenneth Tobin in Science Education to develop interdisciplinary courses for pre-service elementary school teachers in physical science, earth science and biological science. Kenneth Goldsby was central to the development of the physical science course for elementary teachers. From 1993 to 1995, Gilmer ran a National Science Foundation-funded teacher enhancement program, called Science FEAT, with Angelo Collins from Science Education. The program was for 72 practicing middle school teachers to earn master’s or specialist degrees in science education. Goldsby contributed to this nationally acclaimed program, this time as a research mentor to a group of teachers learning science through conducting inorganic chemistry research. 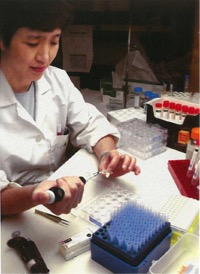 From 1998 to the present, Gilmer has had a National Science Foundation-funded grant called the Florida Collaborative for Excellence in Teacher Preparation to improve teacher preparation in mathematics and science for middle and high school teachers throughout Florida.

She has co-edited two monographs, Science in the Elementary School Classroom: Portraits of Action Research (1997) and Meaningful Science: Teachers Doing Inquiry and Teaching Science (1999). Both are published through SERVE, are widely used throughout the world in science education classes and are available free through the Internet. 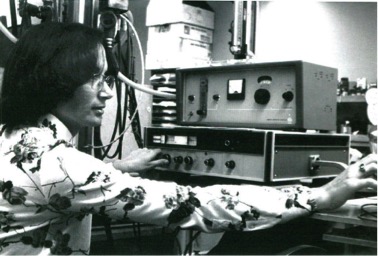 Of particular note is that the Department offers special sections for students who are selected into the honors program. In the laboratory, students receive a research experience with our faculty, an opportunity not generally available to undergraduate students until their junior or senior year. There is a spring poster day at which the honors students present their research to the entire chemistry department. The Department has added three under-graduate majors to the original Chemistry major-Chemical Science in 1974, Biochemistry in 1984 and the Environmental Science in 1995.
In early 2000, Fisher Lecture Hall and the Hoffman Teaching Laboratory were renovated to bring technology and an improved learning situation for students. These renovations were key to meet the need of he growing department and University. Chemistry is needed by students of many majors including chemistry, biochemistry, biological science, engineering, nutrition, nursing, environmental science, chemical science, and education. 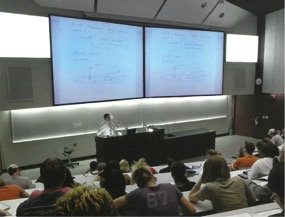 As a commitment to the FSU chemistry’s educational mission, the department host an annual seminar focused on education and educational research. In honor of his contributions to education and to celebrate his retirement, in 1994 this lecture series was renamed after Prof. Edward Mellon. A list of all the speakers can be found here.