The three years (1990 to 1993) during which Edward Mellon was Department Chair is a notable period in many ways. In the final years of the 1980s, the Department experienced major changes. Many of the early faculty who were stalwarts in Chemistry’s early rise to fame had either moved on or retired. The Department also suffered from low state funding and limited new hiring. Mellon, a professor known for his ability to get along with all faculty members and a national figure in the field of Chemical Education, was elected Chair in 1990. He brought faculty together, revised some of the by-laws, and made significant improvements in undergraduate teaching.

Chemistry Faculty in the Early 1990s

Three new faculty joined the Department during this time. Steve Foster, originally from the United Kingdom and a postdoctoral fellow with Terry Miller at The Ohio State University, specialized in high-resolution laser techniques. Hired as a physical chemist, he was highly effective as a teacher here before moving to Mississippi State University in 1994.

Paul Bash, a computational structural biologist from Harvard, relocated after three years. Terry Gullion, a solid-state NMR spectroscopist and postdoctoral fellow with Jacob Schaefer at Washington University, went to West Virginia after five years and has since joined Mississippi State University. Keith Kyler, a synthetic organic chemist hired as an associate professor from the University of Miami, left soon for industry. 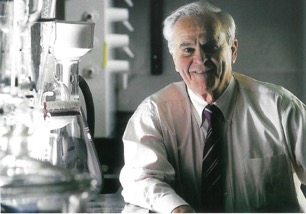 Mellon resigned in 1993 when the search for an outside Chair was initiated. Greg Choppin, appointed for the interim, made many notable changes and important hires. Alan G. Marshall came to FSU from The Ohio State University as a professor of Chemistry and director of the NHMFL’s ion Cyclotron Resonance Program. 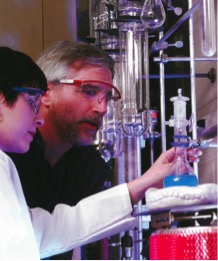 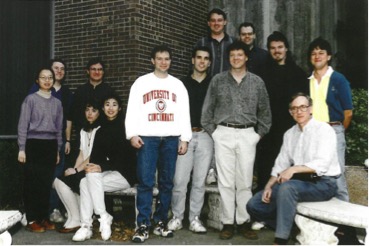 John Dorsey (seated at right) with his research group

When John Dorsey became Department Chair in August 1994, his first task was to secure the share of Taxol royalties that were originally earmarked for Chemistry. Much of this income was placed into an endowed account, the income from which helps to advance Departmental research priorities. One of Dorsey’s early missions was to increase and improve the recruitment and retention of high-quality graduate students. During his term as Chair, the average incoming graduate class was increased to approximately thirty per year, and the number of Ph.D. degrees awarded increased from single digits to over twenty per year. This increase, coupled with good corporate contacts, allowed him to persuade several companies to visit campus to recruit Ph.D. students, the first recruiting visits that had been made in many years.

By winning a combined ten national and international awards after 1995, Marshall and Dorsey made an instantaneous impact on the stature of analytical chemistry research at FSU, raising its rank to being among the top ten analytical programs in the U.S.

In 1994, with substantial funding from the National Science Foundation, a national Fourier transform ICR mass spectrometry facility was established at the NHMFL. The facility has since grown to 25 staff members and postdoctorals, and has attracted hundreds of international scientists as users. Armed with renewed University hiring commitments and the Department’s share of rapidly increasing Taxol royalties, Dorsey began to rebuild departmental resources, particularly in areas depleted by faculty retirements or tenure denials. One field receiving additional resources was NMR spectroscopy, stimulated by the mission of the NHMFL, which has played an important role in developing magnets and magnet technology for NMR spectroscopy and imaging. Geoffrey Bodenhausen was hired in 1994 from the Polytechnic Institute and University of Lausanne, Switzerland as professor of Chemistry and director of the NMR Program at the NHMFL. He was instrumental in initiating a state-of-the-art NMR research and development program before accepting a position as professor of Chemistry at the Ecole Normale Superieure in Paris. Timothy Cross succeeded him, recognizing the NMR Imaging Facility at Gainesville as part of the NHMFL’s NMR Program. 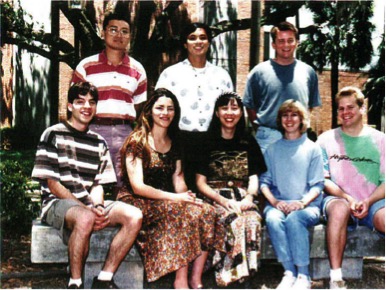 Naresh Dalal, formerly Centennial Professor of Chemistry at West Virginia University, was a senior hire in Physical Chemistry in 1995. His expertise is in the area of EPR and NMR spectroscopy applied to materials science. In 1998, Susan Allen returned full-time to the Department, resigning her position as Vice President of Research. Nancy Greenbaum (Ph.D., University of Pennsylvania, Postdoctoral, Columbia University) and Amy Sang (Ph.D., Georgetown University, Postdoctoral, FSU), both in biochemistry joined FSU.

Terry Gullion moved to West Virginia in 1997 and Bruno Linder retired after a long and illustrious career as a theoretical physical chemist. In 1998, Oliver Steinbock (Ph.D., University of Göttingen, Postdoctoral, West Virginia University) brought his expertise in nonlinear dynamics and pattern formation to the Department and Lev Gelb (Ph.D., Cambridge University, Postdoctoral, Cornell University) came to FSU as a theoretical chemist in 1999. Two others joined the faculty in the same year. Hong Li (Ph.D., University of Rochester, Postdoctoral, California lnstitute of Technology), a protein crystallographer, was retained as a structural biologist and Michio Kurosu (Ph.D., Kyoto, Postdoctoral, Harvard) was hired as a synthetic organic chemist.

Income from Taxol royalties mushroomed during these years, bringing the Department $20M between 1994 and 1999. The Department’s first externally funded named Professorship was established during this time through the generosity of Raymond and Stella Cottrell. Their $100,000 donation, matched by $50,000 each from the State of Florida and the Department (made possible by Taxol royalty income), established the Cottrell Family Professorship to reward excellence in classroom and laboratory teaching. In 1998, Professor Ron Clark was named its first recipient. 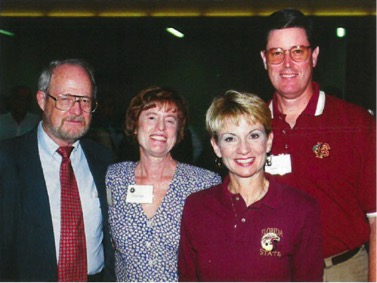 Ron and Sue Clark with Raymond and Stella Cottrell