When Naresh Dalal was elected Chair in 1999, he started to put together a plan to fund a new chemistry building to accommodate the Department’s growth in people and ideas.  In the area of faculty recruitment, Igor Alabugin (Ph.D., Moscow University; Post-doctoral, University of Wisconsin) was retained as an assistant professor in Physical Organic Chemistry and Ken Weston (Ph.D., University of California, Santa Barbara; Postdoctoral, National Institute of Science and Technology) joined the faculty as an assistant professor in Analytical Chemistry. 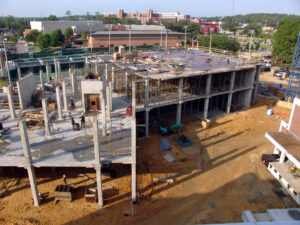 Construction of the new chemistry building.

One of the significant milestones in infrastructure was the renovation of Fisher Lecture Hall (FLH), where large freshman classes are now held. After 25 years of hard use, the Hall needed a major facelift.

Major changes also took place also in Biochemistry with Structural Biology chosen as the focus area for the decade. The Institute of Molecular Biophysics (IMB) building, which housed structural biology faculty (Michael Chapman, Michael Blaber, Tim Logan and Hong Li), was renovated with a grant from the National Institute of Health and matching funds from the University.

In 2008, the new Chemistry Building (now called the Chemical Sciences Laboratory) was officially opened. The new building was key in centralizing the departments instrumentation facilities and paved the way for a swath of new hires in the 2010s. 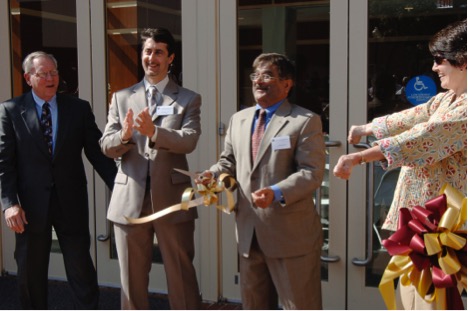