Following the third year of the National Science Foundation (NSF) Center of Excellence Program, Choppin had become convinced that nuclear magnetic resonance (NMR) was going to be an important tool for all areas of chemistry and that he should ensure there would be an adequate NMR laboratory with professional staff to assist faculty and students in its use. He persuaded the administration to agree that chemistry would submit a proposal for state-of-the-art NMR instrumentation, with two doctoral level staff to operate the facility. Initially, the NSF was unwilling to accept this proposal. After some discussion, however, at FSU and in Washington, it was agreed that they would fund the suggested renewal proposal and we added the first 300 MHz machine and solid-state NMRs was added. 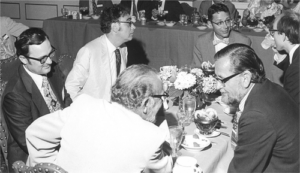 In 1973, the FSU Chemistry Department was selected to host the National Organic Symposium. For the first time, the NOS was brought to a Southeastern, US primarily in recognition of the international prominence of the department’s organic chemistry faculty with Jack Saltiel serving as the local chair. Some 1000 organic chemists came to Tallahassee to attend presentations at Ruby Diamond Auditorium by prominent researchers in organic chemistry. Georg Wittig receiving the 1973 Roger Adams Award from Andrew Streitwieser, the Chair of the ACS Organic Division, was a highlight of the symposium. More information can be found in a historical article in the Journal of Organic Chemistry (DOI: 10.1021/jo302475j).

This was a period of continued departmental growth and maturation in faculty development, the graduate program and facilities. In 1977, Martin Schwartz became chair and served for two successful three-year terms. He later served as associate editor of the Journal of Organic Chemistry, replacing Werner Herz. During his time as chair, the NMR facility acquired national prominence under the direction of George Levy, who left for Syracuse University in 1981.

Robley Light was then elected chair in 1983. He served two three-year terms followed by a seventh year in which the Department attempted a search for an outside chair. This time period saw major developments in departmental instrumentation facilities, an increasing interaction with other departments and inter-departmental programs, and several significant new additions to the faculty. Twelve research faculty were hired during these years, many of which earned tenure. Department contract and grant expenditures doubled during this period. 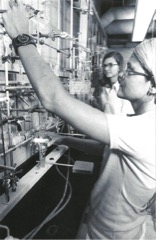 The need for recruiting new faculty had also been exacerbated by the loss of several colleagues to other institutions. George Levy (organic and director of the NMR lab) went to Syracuse in 1981. Larry Bottomley (analytical) left for Georgia Tech in 1983. Emory recruited Lanny Liebeskind (organic) in 1984, where he was later Department Chair. Barry Garrett (inorganic) left that year to work with the CIA.

Efforts to recruit an NMR director took two years. Finally, Tim Cross was hired as an assistant professor, but was given a leave of absence to spend a postdoctoral year at the University of Basel, after which he joined the faculty in 1984. Cross, who received his Ph.D. degree from Stan Opella at Pennsylvania State University in solid-state NMR, was later one of the key players in developing, and later directing, the NMR program at the National High Magnetic Field Laboratory. 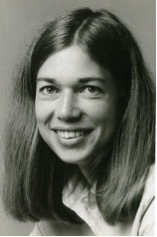 With the semi-retirement of Herz and Walborsky, and the loss of Levy and Liebeskind, recruitment of organic faculty became a high priority. Ed Hilinski (Ph.D., Yale) was hired in 1983 as a physical organic chemist.  Marie Krafft (Ph.D., Virginia Polytechnic Institute) and Robert Holton (who had received his PhD with Marty Schwartz from FSU in 1971) were hired in 1986.

A joint effort between the Department of Energy and the State of Florida led to the funding of a number of new positions for the Supercomputer Computational Research Institute (SCRI) and one of the first supercomputers on a university campus. Most of the positions went to highly computational areas in Physics and Meteorology, but two went to Chemistry.

Peter Langhoff, recruited as a senior faculty member from Indiana, and Frank Brown were both hired in 1984 on SCRI lines. Langhoff returned to Indiana the next year. Brown turned out to be an excellent teacher, winning a university teaching award in 1989. He moved to a faculty position at Tallahassee Community College (2001), where he became Dean of Science and Mathematics. 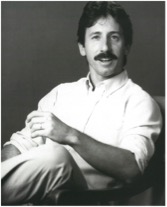 David Edelson was hired from Bell Laboratories in a temporary computational chemistry line and later was transferred to the Chemical Engineering faculty. In 1987, Jerzy Cioslowski (Georgetown University) was hired on the SCRI line and established a strong program in computational chemistry. Ken Goldsby (Ph.D., North Carolina) was hired to fill the inorganic position after Garrett left. He became one of our most highly acclaimed teachers and received the FSU Distinguished Teaching Award for 1998, then became Director of the University Honors Program, and more recently co-authored the 11th Edition of a general chemistry text book (Chemistry, Chang and Goldsby).

In an effort to build up the area of laser spectroscopy, the Department had hired Thijs Aartsma in 1980 (Aartsma left in 1986 to return to the Netherlands). The addition of Ed Hilinski in 1983 added further expertise in laser spectroscopy. Another laser spectroscopist, Steve Foster, was hired in physical chemistry in 1987 but left for Mississippi State University.

Also hired in 1986 were Mark Deakin in Analytical and Elizabeth Pulliam (M.S. Purdue) in a non-tenure track position as Coordinator of Freshman Laboratories. Deakin left after a few years, but Pulliam remained as a strong contributor to both our freshman laboratory program and our training program for new graduate teaching assistants.

Chemistry had participated in a proposal to the Florida Legislature for funding of a program in materials science called MARTECH. Joe Schlenoff (Ph.D., University of Massachusetts), a polymer chemist interested in conducting polymers, started in 1988 as a joint Analytical/MARTECH hire. Will Rees (Ph.D., MIT), who was hired in 1989, was successful in building up a large research group, but he later went to Georgia Technological Institute, where he became a professor of chemistry and materials sciences.

Cross helped to build the NMR facility with a grant from the National Institute of Health to fund a 500 MHz NMR instrument, submitted by Cross, Rill and Holton, in 1988, which included a matching 300 MHz routine NMR instrument. This was followed by funding for a 400 MHz wide-bore solids NMR instrument. Cross played a major role in helping Jack Crow, newly appointed Director of MARTECH, prepare an (ultimately successful) application to the NSF to relocate the National High Magnetic Field Laboratory to Tallahassee

Harold Van Wart, who joined Biochemistry during its expansion in the 1970s, had put together a facility housed in the basement of the Molecular Biophysics Building that contained several continuous wave lasers.

Beginning with a pool of HPLC equipment primarily from Rill and Light’s laboratories, the Department gradually developed a state-of-the art facility, ably directed by Hank Hendricks, for performing biological separations, the synthesis of oligonucleotides and peptides and peptide sequencing. Since its inception, the Molecular Biophysics Program has represented a major interdisciplinary thrust of the Department. When participants decided to reorient, program focus towards Structural Biology, Light developed a strategy for funding that involved applying to the Lucille P. Markey Charitable trust for seed money and the State of Florida for programmatic support money. The Legislature funded the program in three annual increments beginning in 1989, providing four new faculty lines each for chemistry and biology, several staff positions (including one for the NMR facility and one for the BASS laboratory). In late 1990, the Markey trust provided a $4M grant for the program (the largest foundation grant to the University at that time) which was used to set up a large molecule X-ray facility and provide start-up funds for approximately ten new faculty.

Katherine “Kitty” Hoffman was one of the most celebrated faculty at all of FSU. From 1940-1984 she was a valuable mentor to students and faculty members alike. While at FSU she served as Dean of Women, president of the Faculty Senate and continued to serve the community as a board member for the FSU Alumni Association, a trustee for the FSU Foundation, and a member of the College of Arts and Sciences Leadership Council. Following her retirement in 1984, FSU and the Department of Chemistry & Biochemistry decided to recognize Kitty’s contributions by dedicating the undergraduate chemistry education building, The Hoffman Teaching Laboratory (HTL), in her honor. In an effort lead by Dr. Ralph Dougherty, in 1996, HTL underwent major renovation and improvements through and NSF funded grant to create the Undergraduate Chemistry Computer Laboratory (UCCL) . Courses using the Lab’s resources include Organic Chemistry, Introduction to Analytical Chemistry, Advanced Analytical Chemistry, Physical Chemistry, Introduction to Biochemistry and General Biochemistry. Lectures in Freshman Honors, Biochemistry and Science Education are also held there. 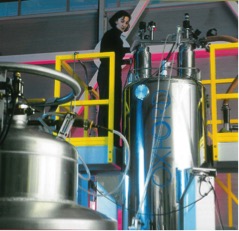 In 1990, FSU, together with the University of Florida and the Los Alamos National Laboratory, won a competitive bid to move the Francis Bitter National Magnet Laboratory to Tallahassee from the Massachusetts Institute of Technology, where it had been since 1945. After the move, it became known as the National High Magnetic Field Laboratory (NHMFL, Mag Lab), with a National Science Foundation budget of $60M for the first five years. 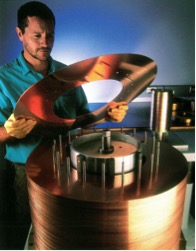 The NHMFL was dedicated at its new headquarters on October 1, 1994 in a ceremony chaired by Vice President AI Gore. Established in 1990 with a grant from the National Science Foundation (NSF) and supported by $120M State of Florida funds during its first five years, it is a model federal-state partnership. The Mag Lab is one of nine research facilities of its kind in the world, and the only one in the Western Hemisphere.

From the outset, FSU chemists have contributed to the planning and growth of NHMFL, bringing in more than $20M in additional federal funding for state-of-the art spectrometers and technique development. For example, NHMFL was the first facility to combine all four members of the magnetic resonance “family”-NMR, EMR, ICR, and MRI. High resolution ion cyclotron resonance (ICR) spectrometry, was introduced at NHMFL by Alan Marshall, who is also the co-inventor of the technique. 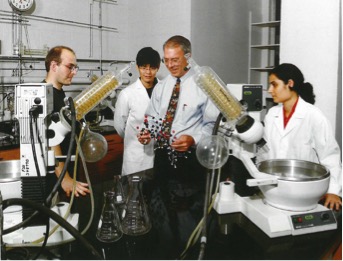 Bob Holton with a model showing his fellow researchers

In 1985, Prof. Robert Holton moved from Virginia Tech to Florida State University and shortly after (1988) reported the first total synthesis of a taxane natural product. Subsequently, in 1994 his team published the first total synthesis of Taxol™, also known as paclitaxel, a member of the taxane family. The synthesis of Taxol™ was a major milestone in synthetic chemistry at FSU but also had broad-reaching implications because of its use as an anti-cancer agent.

For many years Taxol™ was a known natural product (isolated from the Pacific Yew tree) with promising anti-tumor activity. By 1988, Taxol™ had made steady progress in clinical trials for the treatment of refractory ovarian cancer. However, the availability of Taxol was significantly limited it required the harvesting of a complete Yew and extraction of Taxol in <0.005% yield. As an alternative, the Holton group research focused on developing several, highly efficient semisyntheses of taxanes, using sustainably harvested sources such as the needles of the English Yew,  with the first patent application submitted in June 1989. The best of these was in four steps with 85% overall laboratory yield from 1 0-deacetylbaccatin III to Taxol™. In 1990 Bristol-Myers Squibb (BMS) licensed the patent for this process and in 1992 won FDA approval for use of Taxol™ against refractory ovarian cancer. Anticipating the successful development of Holton’s semisynthesis, BMS announced at the end of January 1993 that no more bark would be taken from public lands for the production of Taxol™. BMS scaled up Holton’s semisynthesis, and in November 1994, the FDA gave its approval of industrially prepared Taxol™ using Holton’s process.

Taxol™ then became arguably the most successful medications to treat ovarian, breast, and pancreatic cancers and was administered to millions of patients around the world. Additionally, licensing of the patent brought in hundreds of millions of dollars to Prof. Holton, Florida State University, and the Department of Chemistry & Biochemistry. These funds would later be used to facilitate the creation of the Chemical Sciences Laboratory and to support the enhancement of infrastructure and instrumental capabilities of the FSU chemistry program.