Great changes affected the world, and the Florida State College for Women (FSCW) during the 1940s. Although more than 400 students left the College for war service, student population increased steadily during the decade, crowding laboratories and living accommodations. Additionally, chemistry was so important to the War Emergency Curricula that a set of abbreviated programs was designed to prepare students for routine chemical analysis for military service and industry. 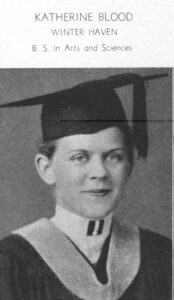 The Department was sorely tested during this time. Sixty FSCW faculty and staff members were lost to the World War II effort over a two-year span. For a decade, The Department of Chemistry operated with only four or five instructors. Because of a wartime scarcity of building materials, flammable solvents were moved from the convenience of the Science Building to a thick-walled vault. In 1944, the curriculum was restructured to accommodate the change from a semester to a quarter system. In that year, Katherine Blood (Hoffman), whose contributions will be noted later, joined the faculty.

In 1945, circumstances began to improve. As Florida state revenue collections increased, so did FSCW funding from $1,339 (1941-1943) to $1,698,000 (1945-1947) to $4,832,000 (1947-1949). An advanced general chemistry sequence was created for students with a solid foundation in chemistry, and the physical chemistry course was renamed “biophysical” to emphasize its medical focus. A major in chemistry required 47 quarter hours, including general, organic, analytical and biophysical chemistry, and nine quarter hours in mathematics or other sciences. 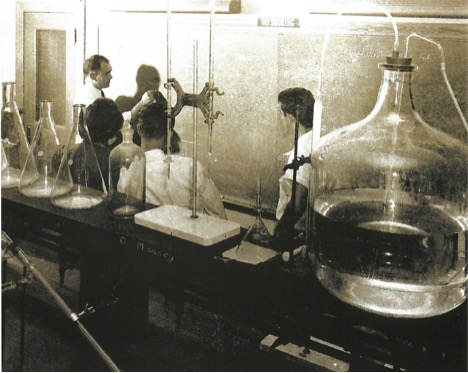 After the end of World War II, there was a massive influx of returning veterans wanted higher education. In response, the Governor of Florida asked President Campbell whether FSCW could accommodate a thousand men if the state funded the cost of their living quarters and provided additional faculty salaries. Campbell’s answer changed the course of this University’s history.