During the period from 1950 to 1960, a group of young Ph.D. chemists brought about a major transition within a fledgling FSU Department of Chemistry. With few resources and great heart, they developed an academic program of research and instruction that became the foundation of one of the most outstanding chemistry departments in the nation today. From the very beginning, departmental research—whether conducted by faculty or students—was an integral part of the instructional program. To support a graduate research program in chemistry, the University allocated new assistant professorships. Karl Dittmer arrived in September 1949 and immediately began recruiting new faculty members. The first appointments were Ernest Grunwald and Werner Herz. Originally appointed as a postdoctoral research associate, Earl Frieden was made an assistant professor in biochemistry when Jennie Tilt retired. With Dittmer, these four became known as “the ’49ers.” 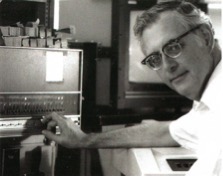 Academic Programs
The undergraduate curriculum leading to a major in chemistry required one course each of analytical, organic and physical chemistry. Senior-level courses in analytical, inorganic and biochemistry could be chosen for the undergraduate major and were available for beginning graduate students if they were deficient in any of these areas. Technique courses and those for non-majors were kept to a minimum. Specialty courses at the advanced undergraduate level were developed as more faculty members were added.

Experimental approaches in teaching were encouraged. For several years, all students in introductory chemistry sections met for lectures at the same hour. Depending on their ability (as determined by written tests and high school study), the students were placed in one of three sections. A small group of students in the advanced section was taught by Kasha. A second group, taught by Choppin, consisted of students with high school chemistry. The third group, instructed by Dittmer, consisted of students who had not taken chemistry. Since all met at the same hour, they could transfer among the sections based on their abilities.

The graduate program in Chemistry was established in 1949. A committee of Frieden, Grunwald, Herz and Wildi developed the guidelines, rules and regulations for both the master’s and doctoral degrees. Included was a Bill of Rights for Students, a unique feature of the program, which delineated and guaranteed the students’ rights and the faculty’s responsibility to them.

Then in 1952, Boris Gutbezahl was awarded FSU’s first doctoral degree, directed by Ernest Max Grunwald. His dissertation was entitled “Acid Dissociation and Acidity in the Ethanol-Water System.” 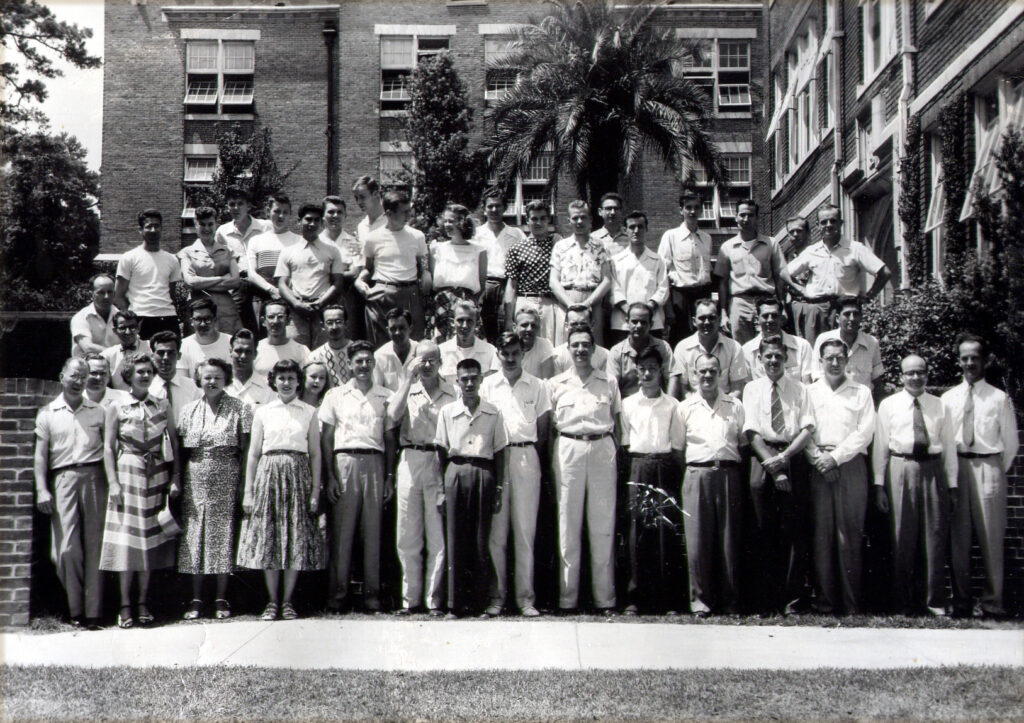 The Chemistry Department in the 1950s

Facilities and Equipment
With faculty, programs, and graduate students in place, facilities and equipment became a departmental focus. The Chemistry Department first occupied the third floor of the Science Building, the portion of the current Diffenbaugh Building that now faces Westcott. They shared the building with Home Economics and Physics. The east wing of the third floor held a small teaching laboratory for analytical chemistry, the departmental office, two research labs and a small shop.

The freshman and organic chemistry laboratories were held in a remodeled theater and a utility building at what had been Dale Mabry Air Base and was now known as West Campus. Students were bussed to and from the main campus to these structures.

There were no faculty or graduate student research laboratories in 1949. Herz and Wildi set up primitive laboratories at the West Campus. FSU owned only one UV spectrometer, a Beckman DU that had been purchased for Home Economics but not used. Grunwald, Frieden, and Dittmer set up their laboratories on the third floor of the east side of the science building. Grunwald built thermostated reaction baths and started the first machine shop. The Chemistry Department developed a small woodwork shop in the attic.

A U-shaped addition to the Science Building was built in 1949 that provided three faculty research labs. Most of the floor space was designed and designated for large undergraduate instructional laboratory sections. To have laboratories for graduate research, partitions were installed at each end of the large laboratories. Faculty and students built grid racks and fume hoods.

The fourth floor of the new addition held a small lab for Walborsky, another for his students and one for Dittmer’s microbiological assay technicians. The rest was divided into research space for Frieden and his students and for Dittmer’s graduate students, using benches from the old portion of the building. The northeastern part was remodeled for Kasha’s spectroscopy research group. With its low ceiling and dormer windows, it was sectioned into research rooms in line with Kasha’s plans.

Soon, the Department was given more space, albeit in the old part of the building. Rooms were remodeled into small lecture or recitation classes, an enlarged stockroom, a woodworking shop and more research space. 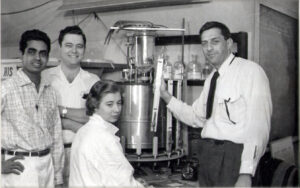 Research
When the graduate program in Chemistry was initiated, meager financial support forced the faculty to find ways to do with very little, find additional sources of support, and maintain high standards. The only research grant in 1949 involved Office of Naval Research (ONR) funds transferred from the University of Colorado for Dittmer’s research on metabolite anagonists. In 1950, Boris Gutbezahl came to FSU with a predoctoral fellowship and in only his second year, Grunwald received a Research Corporation grant-in-aid.

A large number of publications appeared between 1949 and 1953 reporting research conducted without research grants. By 1954, journal publications appeared from the Department that acknowledged financial support from ONR, the Office of Ordinance Research (OOR), the National Institutes of Health (NIH), Research Corporation, FSU Research Council and the Atomic Energy Commission (AEC).

After the first four years, the rate of approval for submitted research proposals was phenomenally high. This reflected the outstanding caliber of the faculty and the research they proposed. By 1958, research grants were also received from the National Science Foundation (NSF), the Air Force Office of Scientific Research and Development (AFOSRD), industrial corporations (Parke-Davis, Dow Chemical, Ethyl Corporation, American Instruments Company).

In 1954, Günter Schwarz, head of the Physics Department, and Paul Reynolds, associate Dean of Arts and Sciences, attended a Florida Legislative budget planning conference in St. Petersburg. When they returned, Schwarz called Dittmer to report that the Committee wanted a proposal from FSU delineating what the FSU faculty could do to support and accelerate nuclear energy developments in Florida.

A proposal was written that described an FSU Nuclear Science Program that would be concerned with education, training, and research in fundamental aspects of nuclear phenomena. It involved basic studies in biology, chemistry, geology, and physics, as well as applications in food technology in home economics. The budget included funds for all aspects of the project, with several million dollars for major items of equipment, such as the tandem positron accelerator, an electron van der Graf generator and shop equipment. Two years earlier, the Florida Legislature had appropriated half a million dollars for the University of Florida to initiate a program for nuclear energy development. But in 1954, nothing had been accomplished, which gave FSU a chance to enter the picture.

The FSU Nuclear Science Program was approved in 1957 for $2.3M for the first year and continuing support for future years. A building was provided for nuclear research equipment. The addition of the equipment, shop machinists, secretarial help, service and supply money and graduate fellowships meant a big step toward recognition and support for research at FSU, not to mention a tremendous boost in morale for the faculty of the sciences. In September 1958, Karl Dittmer left to become Program Administrator of the Petroleum Research Fund administered by the American Chemical Society in Washington. He continued his affiliation with the Department as an adjunct professor until 1960.

At Dittmer’s departure, Russ Keirs was appointed Interim Chair followed by Michael Kasha becoming the first elected Department Chair 1958. Kasha was instrumental in securing a major grant in molecular biophysics for the Department during this time.